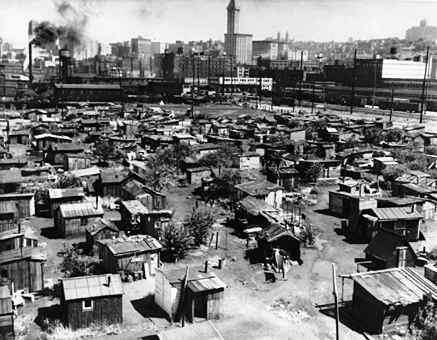 What is a Hooverville (Shantytown)?

As unemployment became an issue in the 1930's thousands of people lost their jobs and were forced to move into shantytowns. Hooverville became a common name for shantytowns also known as a shacktown. The homeless resided here during The Great Depression of the 1930's. 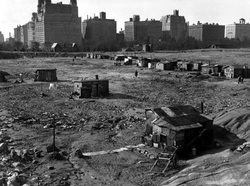 Hoovervilles also known as Shantytowns, was the common place for Americans to live during The Great Depression. Hoovervilles stretched across the United States from New York to Los Angeles. When Americans lost their jobs soon after followed homelessness. Homeowners lost their houses when they could no longer pay their taxes and their mortgages. “ By 1932 millions of Americans were living outside the normal rent-paying housing market” (Gregory, James). Many people were evicted from their homes and were forced to find shelter under bridges, on public land like parks, and next to other buildings in the city. The shantytowns were everywhere in the United States, but mostly in vacant lots in the suburbs. People would build shacks to live in. These shantytowns were given the name Hoovervilles in honor of president Herbert Hoover, which the men, women, and children living in these “towns” blamed for the downfall of the economy. The money the government
had available did not go to the homeless, the sick, or the hungry, but kept for the people in charge of it. These Americans were forced to act like rats. They took anything to build their new homes, the shacks and eat any food they could
get. Using items such as  lumber, tin, cardboard, tar paper, glass, canvas, and a lot of other different objects to compose their new real estate. Some people were fortunate to be carpenters and were able to construct a stable homes, but most were not.

Hoovervilles had a large population. “ 13 million-- nearly 25 percent of
American’s work force”(Hoovervilles). These new towns had a diverse population.
Even though most were white and foreign born. “An ethnic rainbow” (Gregory,
James). These people had to live in the unsanitary conditions. Most were very
dirty and there were many germs and diseases going around. Houses offered
little to almost no protection to the elements such as storms, cold, and rain.
The people living here were also the poorest of the poor and had to survive with very little. They had get their meals in soup kitchens.

I'm up in the world,
But I'd give the world to be where I used to be,
A heavenly nest,
Where I rest the best,
Means more than the world to me.

It's only a shanty
In old Shanty Town
The roof is so slanty it touches the ground.
But my tumbled down shack by an old railroad track,
Like a millionaire's mansion is calling me back.

I'd give up a palace if I were a king.
It's more than a palace, it's my everything.
There's a queen waiting there with a silvery crown
In a shanty in old Shanty Town. 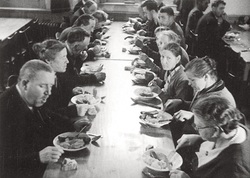 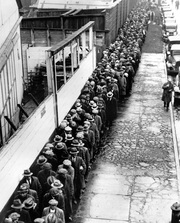 In the 1930s, many people lost their jobs, a lot lost their homes and struggled to survive. There was no unemployment insurance. The people struggled to survive “ by the beginning of  1932 95 New Yorkers had starved to death”(Bread Lines). Many people got food to survive by going through the trash, but many people survived by standing in bread lines, to get food for themselves and their family. Bread lines were as long as city blocks. Even though people that stood in bread lines were humiliated to be there, they survived, and were better off than the people at the end of the lines. The people at the end of the lines rarely ever received food, experiencing, hunger, and fear of starvation.

Soup kitchens opened up in America in the beginning of 1929 , when the Great
Depression was just beginning. At first the soup kitchens were organized by churches
or private charities. Almost every city and town had a soup kitchen. People
might have had to travel into a town or city to get food. These soup kitchens
were run outside, in cafeterias, churches, and service centers. Most of these
soup kitchens only served bread and soup once a day, because soup was
economical. When more soup had to be made to feed everyone, all you had to do was
add water. Therefore, insuring everyone had something to eat. 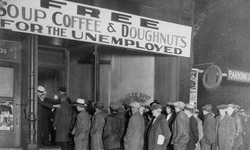 Surprisingly, at the beginning of The Great Depression the first soup kitchen was opened by Al Capone. the dishonorable gangster. He wanted to clean up his shady image. His soup kitchen served three meals a day, when most only served one, to assure everyone that was without a job could get a meal (Depression-era Soup Kitchens). 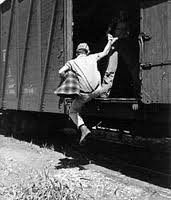 A “hobo” is a term used to define a person who rides trains in search of a job or
a better life. Also known as “gentlemen of the road”. It was said that at one
point in America, there was over a million and a half hobos riding the trains.
Most of which were misplaced white collar workers. Hobos were not seen as
jobless men but instead as a symbol of freedom. Hobo jungles were around
railroad tracks. These were shanty towns where hobos set up campfires to cook in tents.
“Hobos were accepted in towns as long as they stayed on the outskirts
of towns and cities”(Hobos).

Hobos created their own set of terms they all understood. 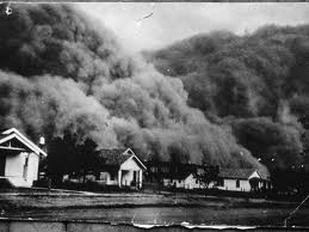 The name “Dust Bowl” was given to the Great Plains in the 1930s because of the drought that occurred in America. The 150,000 square mile area was in many states including: Kansas, Colorado, New Mexico, Texas, and Oklahoma. This area received very little rain in the years 1934 - 1937. Because there was no rain the grass did not grow. With out the grass the soil had nothing to hold it together. The great plains are also known for having strong wind, which together can be a disaster. The wind during the drought could easily pick up the topsoil and make clouds of dust. These dust clouds were called black blizzards. The black blizzards choked cattle and other animals, and also affected people. “60 percent of the population left this region” (Dust Bowl). The people left because it was unsafe. When a person inhaled the dust cloud it ruined their lungs. They “suffered coughing spasms, shortness of breath, asthma, bronchitis and
influenza”(History.com) kind of like miners the people that stayed during the dust bowl had signs of dust pneumonia also known as brown plague, which killed thousands of people.