The Stock Market Crash of 1929

The post World War I Era was a tremendous time of growth, prosperity, and optimism. It is very clear that the 1920's was a time of great economic growth. Electricity was brought into every day lives, and luxuries became necessities. The radio became popular, regular people did extravagant things such as fly over the Atlantic Ocean as Charles Lindbergh did, life during the 1920's was full of optimism, and sometimes even over speculation. Individuals believed life would always be this easy, with the Installment Plan and so many "great" ideas, put in place. Little did they know that the Installment Plan was fictitious, making people believe they had money they didn't actually have. For all of them, The Stock Market Crash was an unexpected curve ball coming their way.
During the 1920's more middle class people began investing in stocks and buying on margin. Buying on margin let an individual purchase a share of a company's stock and use the promise of that share's future earnings to buy even more shares. Unfortunetly, many people abused this system to invest huge sums of imaginary money that didn't exist. Stock prices rose so quickly, causing more and more people to use this system. At the end of the decade it was possible to become rich over night just by buying or selling a stock. In 1929, the stocks went over the amount that the company's represented and a few people began to sell their stocks. As stocks were being sold, stock prices fell as well. Brokers came into a panic and asked investors to pay their debts. The problem was, people did not have all the money, they once thought they had. The investors were unable to repay their debts, and were forced to sell, causing the prices of stocks to decrease even more.Over time, stocks lost about 50% of their value and about 16 million shares were lost (The Stock Market Crash of 1929). The day many people began selling their stocks is called "Black Thursday", October 24th, 1929. Many stocks were purchased on margin, using money that never existed. In 1928 and 1929, the Federal Reserve had raised interest rates in hopes of slowing the rapid rise in stock prices. These higher interest rates depressed interest-sensitive spending in areas such as construction and automobile purchases, which in turn reduced production, and unemployment. The peak of stocks was in September of 1929, and their low was in November. Stocks fell so rapidly, and just between that time frame stock prices declined by 33% (Great Depression: economy). This became known as The Stock Market Crash of 1929. The main problem behind this crisis is the lack of government regulation. The government did not supervise or regulate stocks. They were unaware of insider trading, and that people were buying stocks with their fictitious money. 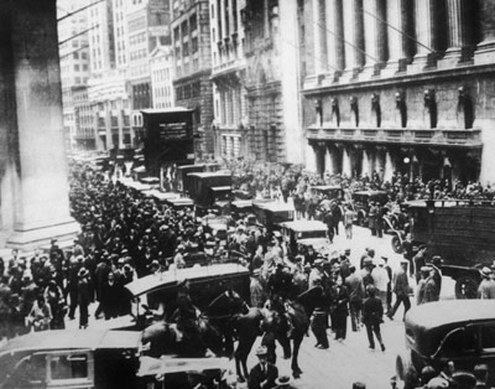